Capabilities of the engine for PetroMod software

The simulator is the core of the PetroMod software suite, enabling simulating the entire history of a sedimentary basin from the deposition of the bottom layer onward. PetroMod software uses consistent simulators in 1D, 2D, and 3D, which means that all technical features and tools are available—and identical—in all dimensions. It also enables using different migration methods—Darcy, flow path (ray tracing), invasion percolation (IP), and PetroMod software’s hybrid Darcy–flow path—IP simulator—with the same data models.

Pressure and temperature simulation is the most fundamental part of PetroMod software’s simulator. Temperature is simulated based on the upper boundary condition determined as the surface temperature, the basal heat flow at the lower boundary of the model, and the thermal conductivity of all layers in the model. Additional effects, such as radiogenic heat generation, can be included. For pressure modeling, various compaction laws can be modeled as defined in the lithologies and pressure boundary conditions can be assigned to account for the effect of regional stress or aquifers.

PetroMod software includes a database of reaction kinetics to predict the phases and properties of hydrocarbons generated from source rocks of various types. Adsorption models describe the release of generated hydrocarbons into the free pore space of the source rock. Users can include their own data or select one out of more than 100 default kinetic reactions based on real source rock data from all over the world. 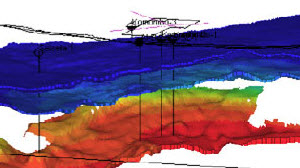