Art vs Science—Evolution of the Digital Driller

I love art. I love science. I love drilling. I always toil with the question; is drilling an art or is it a science? When a driller holds the brake (aka “pig foot” in some parts of the world), he can feel the formation. It speaks to him. He senses it…He can interpret the slightest vibrations and translate it into a feel for how to change the parameters. He knows if he just drilled into a sand or a shale. There’s a beauty in that. There’s art in that. But there is also magical moment when you train a machine learning model to read the surface data and predict the best parameters too.

There is no doubt in my mind that the best driller can out drill the best artificial intelligence (AI) out there. It’s not “go” that we are playing on the rig after all. If it would only be that simple! But there is a shift in the drilling world…there is an evolution in the way we think about drilling performance that puts consistency higher than how fast we can drill. Because while AI will never drill faster than the best drillers, the average of all the drillers in the world is not faster than the AI.

I guess this explains my internal conundrum. Or maybe it explains how I better fit into my current role. Everyday, I get the opportunity to think of ways to extract the art from the mind of a driller and put it into science. So maybe the question is not “is drilling an art or is it a science?” but rather “how much weight should I place on the art of drilling through science?”.

Consider first a recent project on Stickslip. Downhole vibration remains a major challenge for drillers. It takes away the energy that would be better off being used for drilling and it wreaks havoc on downhole tools. As an optimization freak myself, I used to pride myself on the ability to solve vibration issues or extract maximum rate of penetration (ROP) from drilling data. I would let the data talk to me. Very similar to watching the green zeros on the black screen and seeing the woman in red. Something I still do for fun on occasion. We looked at the problem from a unique perspective and focused on evaluation of machine learning algorithms to predict downhole vibrations. Prediction is the first step in a longer road map. The goal would be to find an optimal combination of revolutions per minute (RPM) and weight-on-bit (WOB) to remedy drilling vibration in real-time, hence closing the loop. Drilling mechanics data for thousands of wells, acquired over more than 10 years were analyzed. Results look good. Too good. So good, that it puts a dent in the “art” argument. Or maybe it is just proving we can use machines for art too.

In the last few years, we’ve seen the emergence of hundreds of “AI artists” outside of our industry. Machines can now create paintings and compose music. For this project however, we already can predict stands ahead and we already learned how to do the machine learning on the fly, on the edge…. it’s just a matter of time before the art of optimization is replaced by the machines.

On another project, we wanted to understand how we could extract insight directly from a visual of what was going on at the wellsite. AI again could help here. Our calculation of “rig state” used to be probabilistic and based on particle filtering techniques such as the sequential Bayesian and parametric particle filtering-based detection methods. A complex way to determine the best likely state of the rig since a direct calculation would be a complicated task. Yet, in a three-month sprint, we were able to crack this problem with machine learning video analytics. Another “art” replaced by the machines. In some cases, the differentiation between certain states such as “in slips” and “out of slips” using our approach is found to be more accurate than conventional methods, especially when hook load is low.

The results show the promise of deep-learning-based methods in using video information to infer rig states. The work shows that a camera pointing on the rig floor during drilling operations contains enough information for a model to capture the majority rig states. More cameras will increase the accuracy. Determining Rig State is the beginning of this journey. It is possible to replace drillers’ log with an automated system if the right mix of analytics is employed. As we move closer to automation and remote operations, the ability to expand on this work will be an important piece of the puzzle and yet another example of how the art of drilling is being replaced by science.

What bothers some is not so much that science can replace the art, but that it can replace us as users. Many of us interact with Alexa, Siri or our Google home. Myself, 90% of my text messages and emails come from voice to text. I am even talking this article now and then making the relevant corrections at random intervals. A few years ago, we started investigating how voice interfaces of the future would affect our work. We were able to build a few systems to test our theories. One of these is to have a virtual assistant driller. He could listen and take notes, he could fill out the logbooks while we drill. The activity reports are also done automatically. If something was unclear, he could ask you. We also investigated ways to connect streams of data so we could make the system interact in a more useful way. It’s amazing how angry I still get if it misunderstands me even though I know it’s just a machine and is only as smart as we make it. It shows that deep down I really want the machine to feel and act more like a human.

AI is not the only discipline where we blur art and science, we have also done work on moving data from series, to two dimensional logs and then using the latest visualization and high performance computing techniques to investigate how we can show images at resolutions never before possible in our industry. I read somewhere that as much as 20% of people cannot think in 3D. In other projects, we have experimented on muscle memory using special suits that provide real world physical feedback. When paired with virtual reality (VR) experiences, it creates the perfect mode for training the human brain to operate in high stress tasks. Imagine a rig on fire. You need to follow 10 steps to secure the rig and save the crew.

Even when science has taken over the art, we can still make it look like art. The user experience team have been embedding their secret sauce into the projects and software for this very reason. They help to really blur the lines. So much so that users have no idea when the result they get from engineering calculations is from pure data or a machine learning algorithm behind the scenes. One project, where we built a system to recommend the best drilling bit is a good example of this. We read in historical data from our drilling records, from the bit design characteristics and from public data sources to train a model to be able to predict the best drilling bit to use. From the user perspective, they tell details of the well they are about to drill, and the system offers them bit designs to choose from. They have the choice to ignore it, just like you don’t need to watch every Netflix recommendation.

Drilling is not the only one looking at machine learning, VR, high performance computing and the entire slew of technology to move the digital needle. Completions too is pushing the envelope in our center with projects like virtual twin for the oilfield, Iron-IoT and predictive health management (PHM) for electric submersible pumps (ESP).

The concept of virtual twin is increasing its popularity in multiple industries. The most mature operational twin can be found in the airport’s security set ups across the globe, smart city deployment and retail malls. Digital twin is used in most high-tech machinery industries in manufacturing setups for aerospace, automotive, power generation domains. In case of virtual twin, the concept lies within the visualization and simulation of operational processes, used to achieve synchronization between the involved parties. Combination of virtual twin and digital twins will eventually allow the same scope of actions in operations: anomalies detection, corrective actions and prognostics. Inventory is a manual process. Usually someone counts the amount of iron used on every pad to keep track of utilization and running availability manually. This gives the visibility on the amount of iron pieces, but this process doesn’t track historical wear or exposure. Introduction of Internet of Things (IoT) tracking of individual pieces of iron will allow for better tracking, utilization and exact exposure measurement of every piece of iron, which in case, will allow targeted maintenance. Data-driven detection and diagnosis of failure events in ESP aims to apply a first principles-model-based PHM approach, to not only detect and diagnose faults but also predict the remaining useful life of the ESPs given the fault isolated.

I imagine that as self-driving cars become an accepted norm, there will be those of us who will prefer to still sit behind the wheel and drive ourselves to work. Some will make the argument that no artificial intelligence driven car will outdrive Michael Schumacher. I think they will be right. But having that one special person who can drive like that will pale in comparison to millions of machines that can take the same time every time to get you to work every morning. Michael Schumacher and Mario Andretti are not scalable. Much like the top 1% of drillers.

The digital evolution has already begun. Science is already replacing the art of what we do. Digital technology such as machine learning, cloud technologies, extended reality are just a few that are accelerating the change. Not only in drilling but in other areas too. It is no longer a question but rather a carefully sculpted answer. We will need to be evolve our workforce to be ready. There is a popular joke that the rigs will one day be run by a man and a dog. The man is there to feed the dog. The dog is there to bite the man if he ever touches the controls.

Author information: Crispin is a subject matter expert for drilling at STIC (Software Technology Innovation Center) in Menlo Park, California. In his previous role, Crispin was the Drilling Engineering Center Manager for Russia Land. Crispin started in the field and has been in roles mixing domain expertise, management and digital technologies since then. His current role is to bridge the new and upcoming technologies for the current and future needs of Schlumberger. 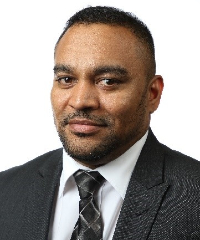