Tired of repetitive manual tasks? The Python toolkit empowers you to quickly perform many functions, ranging from model building and calibration to running simulations, without opening the PIPESIM UI. This is particularly useful for performing repeated actions such as bulk model updating and running batches of simulations. Additionally, the wide variety of freely available Python packages makes it easy for you to leverage the latest advancements in data science, machine learning, and other fields by integrating these tools with the PIPESIM simulator. The power and flexibility the Python ecosystem enables you to develop complex multistep workflows that can be shared.

The GIS component has been significantly updated with PIPESIM 2017 to share the same visualization technology as the Petrel E&P software platform. The result is a significant improvement in performance, up to 5 to 10 times better for interacting with large networks, which can now include several thousand wells. One of the most useful new features is the ability to display results directly on the GIS model diagram using color gradients for rapidly analyzing results to identify flow assurance risks as well as find opportunities to improve production.

Other improvements help you build and update models even faster. You can now extend existing networks by incrementally importing Shapefiles to create new wells and pipelines. Flowlines can be easily split to create junctions for tie-ins of new flowlines and wells.

PIPESIM 2017 is supported by IAM 2017 (scheduled for release in September). IAM field development planning and operations software dynamically integrates the PIPESIM flow simulator with reservoir models of all resolutions, including the ECLIPSE and INTERSECT simulators and the new MBX material balance model and decline curves. On the downstream side, PIPESIM 2017 can be connected to process simulators including HYSYS, Petro-SIM, and UniSim. This high level of integration enables you to perform forecasting through the life of the field to optimize the design and economics of the complete production system.

With this release, IAM has undergone a major usability update. In addition to simplifying the user experience, IAM and PIPESIM now share a similar look and feel.

The 2017 release enhances the rigorous gas lift design capabilities of the PIPESIM simulator. You now have more control over options for valve unloading calculations and production pressure operated (PPO) designs.

The catalog of progressing cavity pumps (PCPs) has been expanded to include PCP solutions from Kudu, a Schlumberger company, and the calculations have been improved to better handle extreme rates.

To promote collaboration and improve model management, well models can now be imported and exported into network models. You can share well models with specialists to perform detailed offline tasks for gas lift design, perforation design, well test calibration, and more. Individual well models can be imported to quickly build vast networks or simply update existing models – either though the UI or automated with Python scripts.

The new User Auxiliary plug-in architecture enables extending the PIPESIM simulator with your science to perform additional calculations of interest along the flowpath. This plug-in takes standard output variables and produces additional profile and branch results using a direct engine extension written in Fortran or C++ and compiled as a dynamically linked library (dll). Several useful examples are included with the PIPESIM “Labs,” a new collection of plug-ins to demonstrate the power of extensibility.

Multiflash has been updated to version 6.1, featuring a redesigned user interface that significantly improves usability and is the version used by the latest release of the OLGA dynamic multiphase flow simulator. Two advanced equations of state for gas that were previously licensed separately are now included as part of core flash packages –GERG is included with the ECLIPSE 300 package and Multiflash CSMA is now included as part of the Multiflash base package. 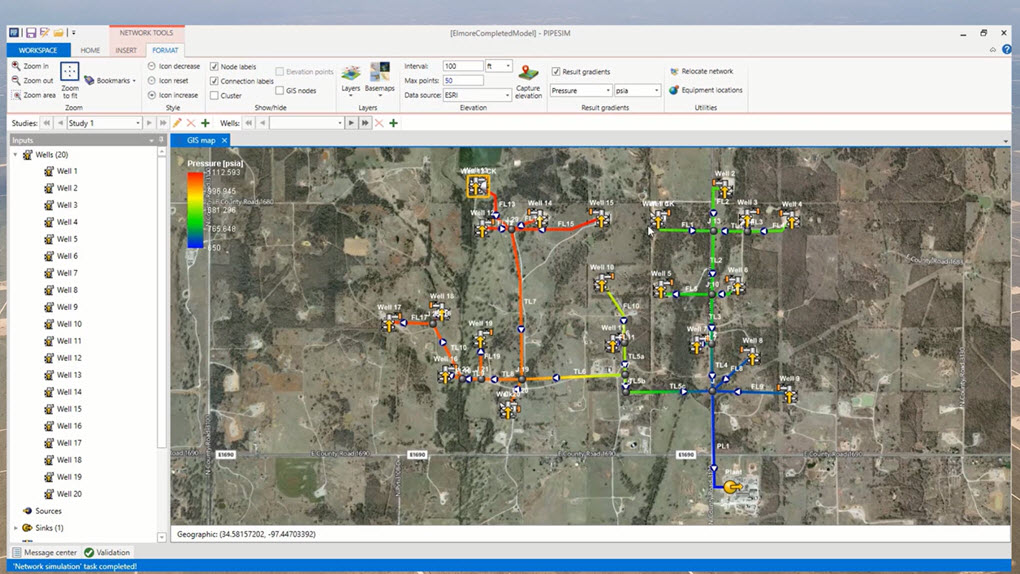