First Glimpse of an Amazing Future

At the SIS Global Forum 2019, Anders Opedal, executive vice president technology, projects and drilling, Equinor ASA shared a futuristic vision for the future of energy production, including fantastic technologies for oil and gas that are already in use. In this inspiring presentation, he revealed the incredible plans Equinor has to utilize robotic and automated technologies and machineries to help deliver the world’s energy needs of the future with step changes in safety, efficiency and the ability to decarbonize the industry.

“We believe digital technologies will play a leading role in solving some of the complex issues this industry is facing today.” Said Anders, after relaying his belief that digital is more than technology alone. “Digitalization is about culture, mindset, and capabilities.”

Anders said the effect of digital technology are broad: It can, improve safety, significantly lower development and operating costs, increase the number of discoveries and increase the recovery rates, and reduce greenhouse gas emissions.

He highlighted data as the key to innovation in coming years. Explaining the considerable contribution of data Equinor has, like Schlumberger, shared with Open Subsurface Data Universe (OSDU) Forum.

He said, “We want to further develop this form of co-innovation by also sharing all CO2 storage and handling data at the Sleipner field from the last 14 years. By making this data available, we seek to further advance carbon storage, innovation within carbon storage, and also to de-carbonize this industry.”

Anders emphasized that new technology is required to drill 3000 profitable wells on the Norwegian Continental Shelf over the next 20 years. He revealed a drilling technology developed with Schlumberger that has been a vision for decades and is now a reality, ‘turning the lights on underground’, with the potential to unlock targets that are not accessible with current technologies.

Taking a leap into what seems like science fiction, he described the future and current use of autonomous and remotely controlled drones in all forms: Flying drones inspecting offshore wind turbines and detecting potential methane leaks on onshore well pads, robotic vehicles which operate inside processing equipment, and autonomous underwater vehicles used for inspecting pipelines, aided by unmanned ships on the surface. EELUME unmanned and modular intervention vehicles are snake-shaped robots that will operate permanently underwater, performing a wide variety of tasks.

“We believe the future is robotized, automated and better connected,” he said. After this exciting presentation, we believe the audience does too.

To find out more, watch the full keynote presentation 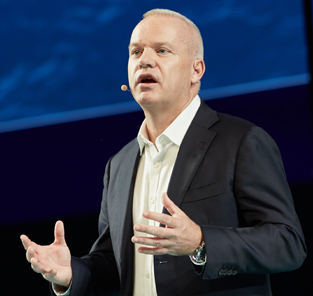 Back to top
View the Full Insights Series