During daytime I develop algorithms to better represent the sub-surface and work on Petrel’s Structural Modeling development project.

Structural models are used not only to understand the underground structures and relationships between their different components, but also to provide any subsequent process (e.g. gridding or property modeling) with the necessary structural information and data structures to complete successfully. In other words, the structural representation is the backbone of any subsurface modelling activity.

I have always viewed diversity as a great opportunity and a strength; and in that respect, my team is extremely strong: composed of people both from different countries and from different backgrounds and curriculum. We have geologists, software engineers, mathematicians, geo-modelers, flow simulation engineers. I have a degree in modeling for mechanical simulation and one in applied mathematics from Enseirb-Matmeca, the same school than our CEO Olivier LePeuch!

I joined the Oil and Gas industry directly from my internship, starting to work in a small startup called Igeoss in Montpellier, a nice sunny town in the south of France. Back in those days we were making a software suite for 2d/3d restoration called Dynel and I was in charge of developing the mechanical engine for the restoration process. Restoration is about deforming the underground back to its original state to have a better understanding of how the subsurface evolved through time.

This all boils down to formulations based on the laws of mechanics (one of my favorite topics) to be able to enforce physical consistency and believability. We also used techniques borrowed from other fields like computer animation which happens to have tremendous impacts on the performance and help on the consistency of the mechanical simulations.  Those mechanical engines were great technical successes and the structural geologists just loved what they were able to see and do!

In 2011, we have been acquired by Schlumberger and my focus changed over time. Our engine was less used for restoration workflows and more for one of its by-products, namely the representation of the structural model itself.  This solution creates a representation of the subsurface by first introducing faults as discontinuities in a tetrahedral mesh. Then it computes an implicit function representing the stratigraphy  (the different layers of rocks), which has many nice features like being resilient to noise or sparsity of the data and allows the user to integrate different types of data (well picks, seismic data, thickness maps) in a single representation.

It was a new and important missing part in Petrel’s workflow to be able to make the junction between the seismic interpretation and the petrophysical properties modeling and reservoir simulation. So, we gradually integrated the crucial chain of processes needed to construct a precise, coherent and faithful model of the underground for exploration and production.

The mechanical restoration engines have then been adapted to support advanced property population. The deformations that were applied to represent the paleo-structures at given geological ages are now leveraged to create a pseudo 3D wheeler space (an unfolded and un-faulted representation of the sub-surface for every stratigraphic sequences).

An environment where geodesic distances (shortest path between two points following the stratigraphy) are parallel to an ortho-normal Coordinate Reference System’ axis.

From my perspective that was an important shift and, besides the changes implied when moving from a startup into a major corporation, we managed to convey some great ideas to the upper management (like the DepoSpace-Depogrid) leveraging some locally grown solutions.

I’m constantly looking after new technologies and see how they can blend into sub-surface modeling workflows. ML (Statistical Learning), Elastic Cloud-Compute, Quantum Algorithms are amongst emerging tools that I keep a close eye on with some interesting prototype results… but this is for another post…

Author information: Thomas Laverne is an expert in structural modeling and a simulation nerd, excited by anything that lies at the intersection of math, physic and computer science. He is notoriously known for his lack of humor and self-mockery. 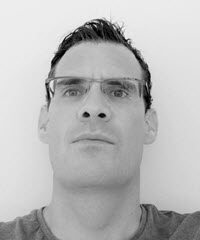