One of the key issues in reducing emissions from large stationary sources like power plants or cement factories is the sheer cost associated with capturing the carbon dioxide and storing it underground. It is a daunting prospect even for large industrial players.

Policy makers have taken a first step in the US with supporting policies, but in most cases, a tax credit is just not sufficient to justify a Carbon Capture and Storage (CSS) investment; it would cover maybe half of what is needed. So how do we get started without relying on new or expanded policies, which might take a while?

In my mind the answer is in the development of voluntary market mechanisms that allow consumers [such as a construction company buying tons of cement and steel] to purchase totally decarbonized products if they so wish. This assumes a few things: (i) that green products exist, (ii) that consumers are willing and able to pay a premium for a green product, and (iii) that the mechanism in place is verifiable and trustable for all parties.

We are already offered plenty of choices in our life, for example by offsetting our carbon footprint from air travel, or by paying a premium to buy a super-efficient washer dryer. These are voluntary decisions driven by our means and convictions. But frankly, when I give $10 to offset my flight, I am just not sure that the airline uses the proceeds to plant trees, I just trust they do.

The good news is that technology can get us there, and probably much faster than what governments can do on the policy front.
Let’s start with the producer of goods, like a cement manufacturer who has been busy implementing energy efficiency solutions, switching fuel to renewables, and optimizing its curing process. These initiatives have already reduced the carbon intensity of cement by quite a margin. But it is only by doing CCS that one can produce zero or near-zero carbon cement.

We now imagine that a producer takes a leap of faith and implements CCS on one of its plants, and now produces for example 1 million tons of green cement each year. The producer has essentially created a “bank” of carbon credits. The next step is to unbundle the decarbonized cement from its environmental attribute. It means that regardless of where the CCS plant is located, the producer can sell green product from its “bank” anywhere in the world, even if the physical product delivered to the client is not the one coming from the plant with CCS. Every time a consumer chooses to buy green cement, the right amount is debited from the “bank”. That allows for the CCS cost to be spread across a much broader consumer base.

"Unbundling" exists in other markets, for example in power. When a consumer decides to buy green power from a local utility, the electrons consumed do not come from any specific solar plant, but rather they come from the grid. There is a dissociation between the physical attribute and the environmental one. The same could apply to other commodities.

What a producer needs to do first, is to test with its customers who would be willing to pay a premium, and how much they would pay, if indeed they were given the option to buy a green product. And if there is sufficient uptake, then a producer could justify investing in a CCS plant because there is certainty in recovering its investment.

A “Bank” would provide tremendous flexibility. Let’s assume that the cost of CCS would add a 100% premium on the price of cement, which only a very small portion of consumers could absorb. But could some afford a 10% premium? In that case a consumer could buy cement with 10% lower carbon intensity and the bank would be debited by one tenth of a credit and not a full credit. This concept applies to any intensity.

The consumer has to play its part and commit towards buying a greener product, but at least now it has a choice. And the most important part is that the consumer must have confidence in that the premium is really associated with a physical reduction in emissions somewhere in the world, just like the travel offset.

That can be done by using blockchain technology. Such system would ensure that each ton of CO2 reduction is properly accounted for and not duplicated and would allow for a totally verifiable process with infinite scale potential, eliminating fraud and misallocations.

Producers should test such concept in their core market, for example across the EU or in North America, and work with their regulators to put in place acceptable solutions. They could gauge market adoption while testing how such accounting system would work in their own industry. The unbundling would allow producers to implement carbon reduction solutions where it makes most sense, for example where there is fantastic geological storage at proximity to a plant, and a very progressive regulator.

Carbon reduction will require all actors to play their part. We can’t continue to rely solely on policy to instill change, and we can force a market transition with solutions over which we have a much greater sense of control.

These are my personal views.

Author information: Damien leads the Carbon Capture and Storage business unit at Schlumberger New Energy. He joined the company earlier this year and comes with 20 years of experience in the energy transition space. Prior to joining Schlumberger, Damien was the lead investor at the Oil & Gas Climate Initiative, covering sectors such as CCS, methane emissions and energy efficiency. Damien also worked at BP in several roles, including head of strategy, chief of staff and CFO of BP Ventures. He has an engineering degree from Liege University in Belgium and an MBA from Booth Chicago. 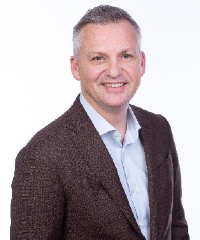