Hydraulic fracturing is one of the most effective reservoir stimulation techniques performed to reduce the resistance to fluid flow to the well. It is applicable for a wide range of geological formations from shale to sandstones. Since the first hydraulic fracturing job in the 1940s the technology has evolved continuously. In North America, around 70 percent of the new wells drilled are horizontal wells that require hydraulic fracturing to produce at economical rates.

The fundamental steps in hydraulic fracturing has remained the same over the years:

However, in order to improve efficiency and increase success rates there has been many innovations in the last couple of decades that focuses on improving operational efficiency, optimizing treatment execution and ensuring fit-for-purpose stimulation design.

Schlumberger has always played a leadership role in this area. It has continued to innovate with specialized fluid systems that fit the formation being treated and technologies that maximize fracture conductivity. For example, BroadBand services has been specifically developed for unconventional reservoirs. BroadBand composite fluids, containing a blend of proprietary fibers and rheology-controlled fluids, promote effective proppant transport and placement that result in highly conductive flow channels. Another innovation that has made a difference in the industry over the last decade is the HiWAY technique which has increased production considerably but at the same time significantly reduced water and proppant consumption.

The complexity of modern hydraulic fracturing requires a multidisciplinary approach for optimization that combine geology and geophysics, petrophysics, rock mechanics and fluid flow of slurry with reservoir engineering concepts of hydrocarbon production. The complexity arises due to many factors such as heterogeneity of the formations, particularly in shales; increasing well lateral lengths and number of stages; and closer spacing between the wells. Good stimulation design needs to consider all these factors. A cookie-cutter approach is often detrimental, and it is estimated that approximately 16% of the wells in the US fail to meet the initial production estimates (Kimberlite, Aug 2020).

Under this backdrop accurate modelling of hydraulic fracture designs becomes very important. The key considerations depend on the geological and operational settings. In unconventional reservoirs these considerations include:

Kinetix stimulation-to-production software is a plugin for the Petrel E&P platform intended for comprehensive analysis and optimization of reservoirs with wells that require hydraulic fracturing. It is designed to support multistage completion, stimulation design, and production evaluation for conventional and unconventional reservoirs. The multi-disciplinary nature of the workflow is reinforced in this software and all the key considerations described above are incorporated in the workflow.

In order to ensure the applicability of the software for a wide range of geological settings several modelling algorithms are supported, i.e.:

The effective placement of proppant in a fracture has a dominant effect on well productivity and this needs realistic modeling. Traditionally, proppant transport models are 1 dimensional in x direction but considers proppant settling in each cell. To model advanced fracturing technologies such as heterogeneous proppant placement (HiWAY), fiber-laden slurries, proppant mixtures, and so on, a more sophisticated approach for modeling transport of solids was necessary. In Kinetix, it is provided by Multiphysics Planar3D/P3D advanced transport model.

Simulating the creation of fracture accurately is fundamental to good hydraulic fracture design but needs to extend to reservoir simulation for optimization of the entire well pad or reservoir. Production gridding and numerical simulation are the key components for evaluating well performance after stimulation treatment design. In Kinetix hydraulic fractures are explicitly modeled. Thus, production gridding involves creating a simulation grid that is geometrically refined to the fractures, which incorporates both matrix and hydraulic fracture properties. The fracture grid can be either structured or unstructured. Numerical simulations are run on the grid using the high performance INTERSECT reservoir simulator.

As the reservoir pressure declines due to production, a depletion region is formed near the stimulated area. This causes a change in the magnitude and azimuth of the in-situ stresses. This phenomenon is modeled in Kinetix by coupling the reservoir simulator, INTERSECT, with the geomechanical finite element simulator, VISAGE. For optimal design of infill wells refracture jobs it is important to consider this depletion shadow effect.

All along the workflow, models must be fine-tuned if field data is available to ensure the validity of the models. For example, calibrating the hydraulic fracture model using microseismic data helps in building confidence in the hydraulic fracture geometry. Similarly, reservoir simulation model must be history matched with pressure and production data to ensure the right material balance calculation over time.

As with our other software solutions we offer a cloud option with Kinetix too. Now we can run multiple simulations very fast in the DELFI environment. In DELFI, Kinetix offers a custom workflow, Sensitivity on the Cloud (SOTC), to perform sensitivity studies in record time.

With the release of Kinetix 2020.1 this month, the industry has access to very interesting developments both in terms of functionality and performance. Whether you are an expert or simply investigating stimulation with Kinetix for the first time, we can offer consulting, workshops, support or training. We would love to hear from you.

Author information: Raj Banerjee is a Schlumberger Advisor in Reservoir Engineering, currently based in Houston, USA, where he provides technical advice on software and workflows related to unconventional resources. His areas of expertise include reservoir engineering, production engineering and production operations including Digital Oilfields (DOF).

Raj has a PhD degree in Applied Mathematics and Master’s and Bachelor’s degrees in Petroleum Engineering. He has 15 US patents and more than 20 publications. 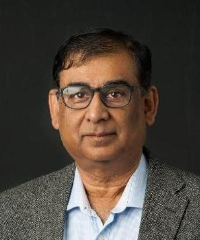