20 years of Petrel: From a precious dongle&hellip;to DELFI Petrotechnical Suite

We knew something was cooking for a while, but today Jan Grimnes the main founder of Technoguide is breaking the news “Schlumberger bought Technoguide/Petrel”.

Like most of the 140 employees, as well as our existing clients, I am very uncertain of the future of Petrel under big blue…the rest is history.

Back in Technoguide time, I was an account manager, based in Oslo, taking care of French and Eastern European clients or any other worldwide opportunities that would pop up. I was in charge of prospecting: Starting from cold calls, running the first demonstrations with my orange Petrel box, my precious dongle and a projector in my backpack.

After successfully demonstrating Petrel, we were following up with a two to three day evaluation. Creating 3D models from scratch, then issuing a quote, following up, and when lucky, selling one or two licenses and training our customers.

These were fantastic days; very intensive as we had to do everything from A to Z!

Petrel was not killed by Schlumberger—it grew as a standard in the industry!

Shortly after the acquisition, in March 2003, I was transferred to Indonesia and, that is really when blue blood started mixing with orange. I was fully immersed, alone in a Schlumberger office, where Petrel was virtually unknown. I spent a lot of time coaching and teaching, so both my peers and clients could see the real Petrel benefits.

I was travelling so much that I would spend, generally, only two to three days in my apartment in Jakarta. My driver was very happy and relaxed!!

These days were amazing because I met fantastic people everywhere from Myanmar to New Zealand and from Indonesia to China. Here I am pictured with my colleague, Martyn, in China in 2004.

Starting from 2003, Schlumberger invested a lot into Petrel; increasing the small team of developers of less than ten, to hundreds. Very quickly Petrel became more and more popular and impressed the market with new functionalities, connecting with existing Schlumberger technology, such as the ECLIPSE industry-reference reservoir simulator, and adding fantastic new technology, such as ant tracking for the detection of faults on seismic.

Great efforts were also done in terms of scalability to import more seismic and more wells into Petrel.

Petrel as a common platform in Schlumberger

In 2008, I moved to Angola and was covering all sub-Sahara countries including Nigeria. After a quick move to France and Aberdeen, in 2011, I moved back to Asia, this time to Brunei.

In 2013, I moved to a different product line in Schlumberger, joining WesternGeco, where Petrel was not fully used. I worked on developing workflows around quantitative interpretation (Petrel QI), specifically on improving fault detection using ant-tracking on pre-stack seismic data.

So, the Petrel family continued to grow, being enriched by Schlumberger technology at large, allowing us and our customers to work on more workflows and discovering new capabilities every day.

So did my family, I dropped my single status in 2008 to become the proud mother of five by 2017, so as Petrel grew, my family also rapidly grew 😊.

2017 Back into SIS HQ Marketing team

In 2017, I was brought back into SIS, my original Schlumberger product line, as part of the HQ Technical Marketing Team, now based in Paris, where I am still working today. In 2018, we marked 20 years since the first release of Petrel by Technoguide, and I was involved in the book writing and organizing all the events globally.

I am now working on exploration solutions and the development of specific workflows with a much bigger Petrel, now known formerly as the Petrel E&P software platform, and the new native experiences for the DELFI cognitive E&P environment, such as the ExplorePlan accelerated exploration planning solution.

In 2017 and 2019, I was part of the core team organizing the SIS Global Forum in Paris and Monaco. The SIS Global Forum 2019 in Monaco, had a record number of attendees and an impressive list of thought leaders sharing their opinions and vision on the digital future of the oil and gas industry.

This was the best Forum we delivered, and the atmosphere was fantastic. All our solutions were demonstrated live on the exhibition floor, no PowerPoints, only true DELFI solutions live. And the Petrel platform was, of course, there, with a new logo, fully embedded in our DELFI Petrotechnical Suite, powered by the cloud.

What are the next steps?

Exciting time are ahead, with a focus on the digital world. Due to the COVID19 crisis, I am forced to work from home with a small laptop, but I can still open the Petrel platform every day from home, which is pretty amazing, thanks to the DELFI environment. No need for that precious dongle, or for big heavy desktops, anymore!

I am in charge of the marketing of the ExplorePlan solution, the new DELFI-native experience for exploration planning, which was released commercially in early June 2020—there is a lot to be done.

My last integration project lately was to develop a workflow to help our customers with virtual data room and farmout business development, and the Petrel platform is still at the heart of it, together with the ExplorePlan solution combined with the GAIA digital subsurface platform.

Bright fufure for the Petrel platform

Evolution has been the one constant in the 20-or-so-year life of the Petrel platform. Cross-domain collaboration and data integration have always been the platform’s strong suits and having it in the DELFI environment promises truly transformational change. It also takes Schlumberger commitment to openness to another level, as it is now even easier to integrate external data and software with the Petrel platform, as well as customizing and adding your own ideas and intellectual property to make it yours.

I am very proud because I think the Petrel platform today is the best it has ever been. But with users, developers and partners working all together, I know we can make it even better!

I am pretty certain I will retire before the Petrel story ends! Long life to the Petrel platform!

Author information: Caroline Le Turdu has worked in the oil and gas industry for the last 20 years. After a PhD in Structural Geology in 1998, she started her career in Norway as a two-year Post-Doctorate in Elf Petroleum Norge in Stavanger. In 2000, Caroline joined a Norwegian startup called Technoguide which developed the software Petrel as a technical account manager for the European and Eastern Europe markets. In 2002, Technoguide was bought by Schlumberger.

With Schlumberger, Caroline was exposed to many different geosciences and sales positions with worldwide exposure in Norway, Indonesia, Nigeria, Angola, France, Scotland, and Brunei.

Caroline has been active with the EAGE Women in Geoscience & Engineering as a Chair since 2015 and co-Chair since Nov 2013. She is now the EAGE Membership and Cooperation Board Officer (2018-2022). Caroline is also volunteering as coach and mentor. She is enjoying sharing her technical knowledge through the Schlumberger Eureka Network as the SIG Leader for Reservoir Characterization from 2015 to 2018. She is also part of the scientific selection panel for the Faculty for the Future Schlumberger Foundation. 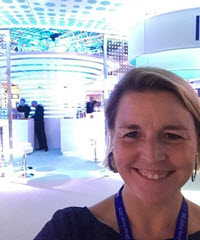